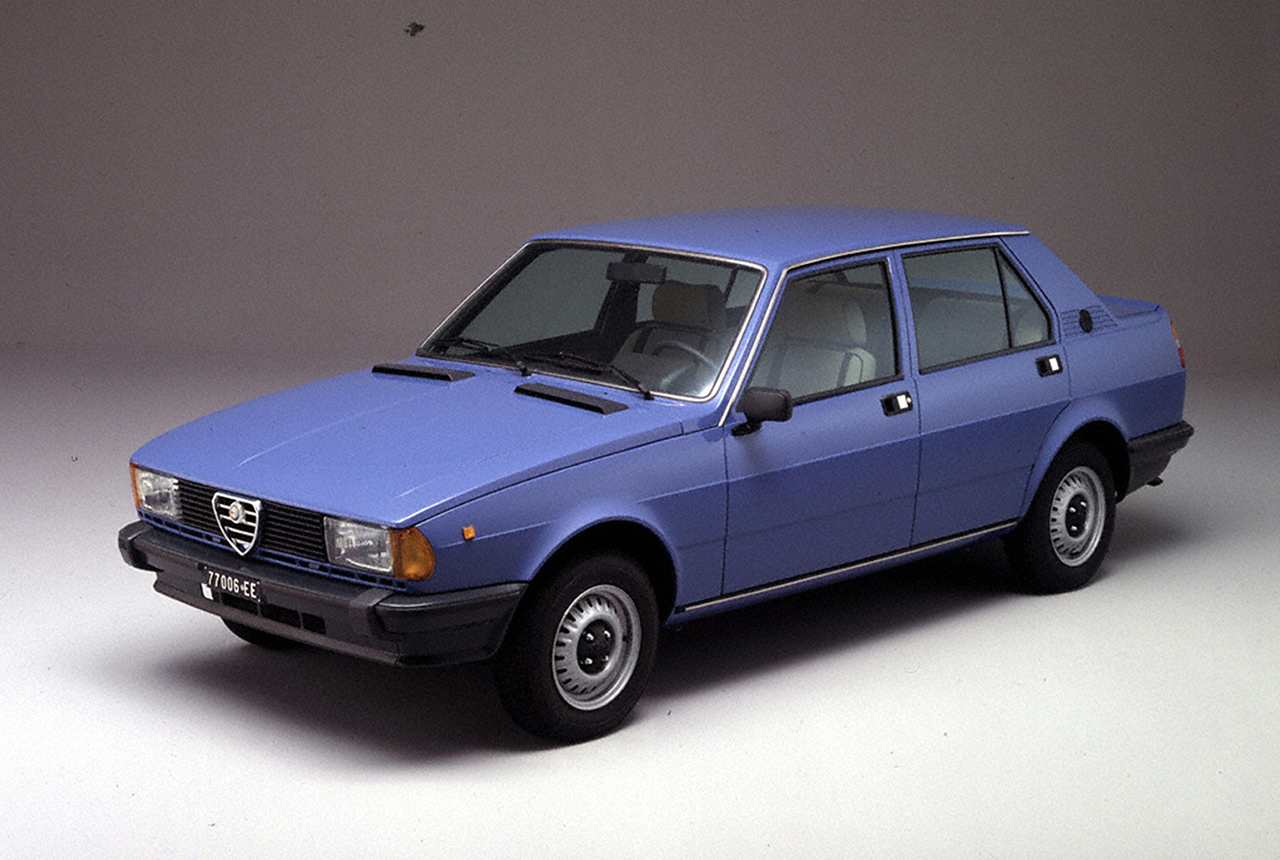 You never throw anything away. From this perspective, the Alfa Romeo management decided that the time had come to think about the replacement of the by now old Giulia, which had been on the market since 1962. The project 116.44/50 was characterized by the greatest economy possible on design and development costs by using as a starting point the chassis and the mechanics of the Alfetta, which had been presented the year before. The bodywork design was entrusted to the in-house Centro Stile managed by Ermanno Cressoni, already known for being the first-ever architect to be employed by a car company as the person in charge of the Centro Stile.

The definition of the bodywork and interiors design was long and difficult and lasted more than three years, while for the mechanics things speeded up and, finally, in November 1977, the «Nuova Giulietta» was presented to the press in a very evocative location: Taormina, a wonderful Sicilian town. At its debut, the car was available in two models: a 1.3 version with 96 HP and a 1.6 version with 109 HP, which was the top of its range also for its standard equipment. Inside, the dashboard stood out for its modernity and function, while outside stuck out the dark-grey integral metal bumpers, which produced a plastic effect without the benefits of an inferior weight and reduced costs of production: quite an odd thing for the time. However, the topic that stirred a most passionate debate among the press was the design of the Giulietta’s rear, defined «duck tail» (well, actually not in these polite terms), that the traditional clientele of the car company didn’t really appreciate. The new average car of the Milanese car company was positioned, in terms of both price and performances, a step below the Alfetta and it replaced, as expected, the Giulia and the 1750/2000 too. In contrast to the superior model, a promotion in Northern America had not been planned for the Giulietta (the promotion had been a mess for the «Sport Sedan», the Alfetta – very little – sold in the US). In 1979, the 1.8 version with 132 HP was presented, in my opinion the best engine type, and the following year the 2.0 Super with 132 HP and an exterior equipment considered, even at the time, somewhat kitsch. In 1981, the second series was presented with a restyling that involved several details, both exterior and interior. The rear band with a satin finish was finally removed, because it caused dangerous reflections in peculiar light conditions: if you had a Giulietta in front of you in a sunny day, you just wanted to pass it as soon as possible: the reflection on the rear silver band pierced straight through your eyes. The restyling was the occasion to mount new plastic bumpers, real plastic this time, and side protective bands which varied according to the car models. Two years later the «Turbodiesel» version with VM engine and 82 HP made its debut, but it wasn’t particularly appreciated by the clientele. In 1984, in occasion of the third series presentation, the range was completed by the «2.0 Turbo Autodelta» model with 170 HP; it was characterized by a very sporting look with a metallic black painting and rather flashy red interiors, and it was the last Alfa Romeo to carry the logo Autodelta, the sport logo of the Milanese house. The Giulietta was the only Alfa Romeo model not to be involved in racing and it was never chosen as a Carabinieri patrol car. In 1985, after 380,000 manufactured units, 361 of which were Autodeltas, it was replaced by the Alfa 75.