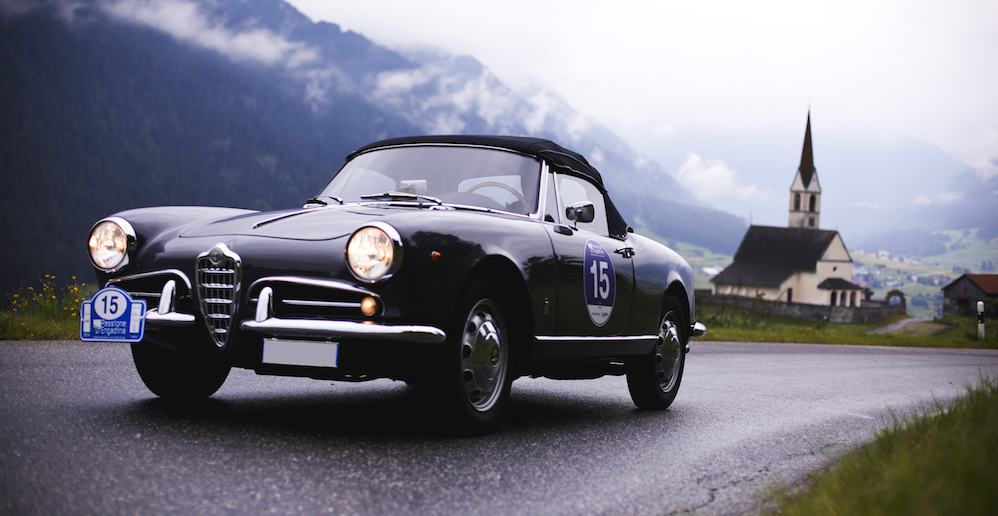 Italy’s sweetheart, that’s how the Giulietta Spider was called. Actually, everybody adored it for its stunning Pininfarina design.

However, it wasn’t an Italian who had the idea to create this dream car, but Max Hoffman, the legendary American importer of European cars to the United States. To make it clear, it was he who encouraged Mercedes to produce the very well-known Gullwing 300 SL, the following 190 SL Convertible and the Jaguar E TYPE, to name another. An almost mythical character of car history.

In 1954 Hoffman was in Milan to meet some Alfa Romeo’s managers and to buy a batch of Giulietta Sprint Convertible designed by Bertone, which he would sell in the US where Italian sport cars had several admirers. On that occasion, during a luxury dinner at the Salvini Restaurant in the Lombardy’s capital, probably with the help of abundant libations, Hoffman stated he would order 600 Giuliettas with, in addition, an option for 2000 more cars provided Alfa Romeo would design a two-seat convertible version. The Alfa Romeo’s managers at the dinner were taken aback, because the company had not envisaged to make a spider version of the Giulietta, considered that at the time British and German spiders would sell a lot on the American market. However, with such a substantial order, how could you say no and, what’s more, to Max Hoffman…

The following day, Federico Acquarone and Rudolf Hruska, the future “father” of the Alfasud, commissioned to Carrozzeria Bertone and to Carrozzeria Pininfarina – making them compete against each other – the study and development of the Giulietta Spider. Franco Scaglione, who was Bertone’s designer, proposed a very modern and almost futuristic (for the time) bodywork, however elegant; Pininfarina, on the contrary, proposed a more classical design, probably more similar to the Lancia Aurelia Spider which they were already manufacturing. When Hoffman was back to Milan, he saw both prototypes and chose Pininfarina’s. Bertone had manufactured two prototypes: Hoffman bought one for himself, while the second remained at Alfa Romeo that later sold it to an Italian customer. In March 1955, after a difficult development concerning the style of the car’s specifics, the Giulietta Spider was eventually presented at the Paris Salon at the cost of Lit. 1,710,000. The Veloce version was more expensive (it cost Lit. 200,000 more), but it was not the definite version yet. No one still knows nowadays which Pininfarina’s designer created this masterpiece of style; there were rumours about five designers, but no one knows who really designed the bodywork. It wasn’t a triumphant debut; on the contrary, an Italian newspaper called it «the Aurelia of the Poor», probably because of some echoes in the bodyworks. Soon after it was finally put into production but, because of the enormous request, Alfa Romeo’s production line – not perfectly adjusted to manufacture such bulky volumes – got flooded. Result: just one car produced in 1955. The real production started in 1956 with the first series (in-house code) 750 D, Standard, and 750 F, Veloce. For the Standard model, the production amounted to 1,007 cars, for the Veloce model to 18. Customers could breath a sigh of relief.

They both mounted an engine with a capacity of 1,290 cc and 65 HP, a max speed of 160 km/h, Solex twin carburettor, 4 speed gear, rear-wheel drive and drum brakes, the sour note of this series. The Veloce model, thanks to two Weber carburettors and with a different compression ratio, could reach almost 180 km/h, at the time a speed that only very few cars could reach. This is the less produced version, with only 2,796 cars, and for this reason the most sought after by collectors.

The amazing success forced Alfa Romeo and Pininfarina to organize two shifts in the production line of their factories in order to meet the requests, also arranging two quality controls, both at Grugliasco’s and Milan’s plants. The production proceeded smoothly when in 1958 the new Pininfarina factory was inaugurated. Everybody wanted it, actors, singers, football players, the Giuletta Spider had become a social phenomenon.

In 1959, the second series (50 mm longer) was presented; the interiors were a little different, while the engine power reached 80 HP. Trims, controls and lights were changed because the new Italian Road Code had entered into force that year. Nowadays we would say that driving the Giulietta was somewhat tough and challenging in wet conditions; with a 4 drums breaking system, it took caution in downhills, because breaks would often bottom out after an intense use. But Giulietta would be forgiven everything. The year 1960 witnessed its biggest success, with a production of about 5,000 cars; the third series was presented in 1961, with an improved gearbox, but its retirement was close. The Giulia Spider was presented at the end of that year; it was about the same as the Giulietta, but with an engine capacity of 1,600 cc. In summer 1962 it was removed from the catalogue, even though the production continued for a few more months because of the pleas of the last customers. In total, between Standard and Veloce models, the production amounted to 18,000 cars. The Giulietta Spider has become a myth and remains a milestone of the car industry.