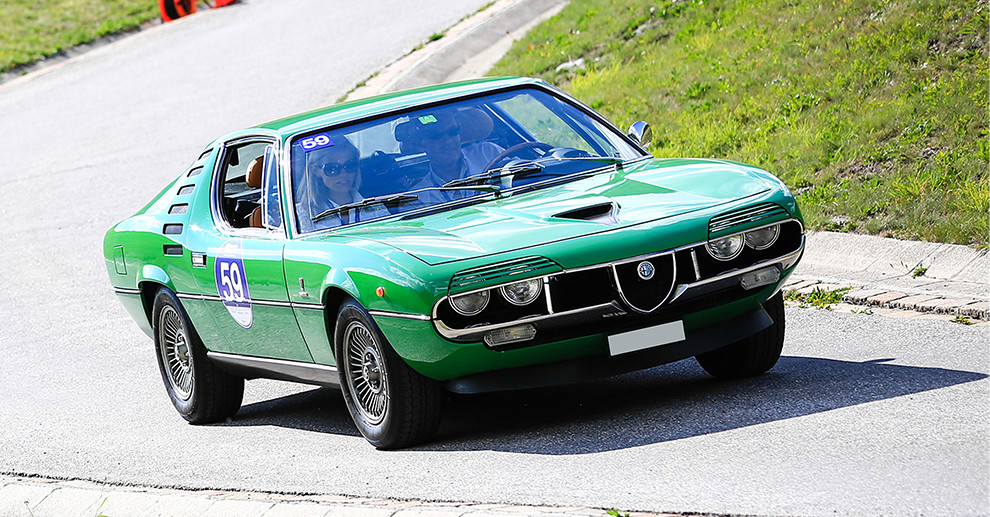 Yes, I know, you all remember it. Many fans of sport cars will not even think about the capital city of Canada. Yet, as soon as the topic is the Alfa Romeo Montreal, everybody remembers it, me included. A regular customer of our family pub owned an orange-painted model. The tangerine colour did not really suit it, but in 1974, at the very young age of 7, I asked him to take me for a ride. Since then, it was an everyday agony. The town of Campione d’Italia, where I was born and raised, seems like a racetrack. In fact, during the Fifties, several rather important races took place there. After the morning coffee, the owner had to take me for a ride. In particular, I remember a summer afternoon: he was in a good mood and drove me to Lugano at 210 km/h. I can hear still today the roar of the Alfa Romeo’s eight cylinders and every time I see one, my heart skips a beat. I still like it as I did at the time.

The story of this car began in 1967, at the Canada’s Expo, which that year celebrated the Federation’s centennial and the unique Italian car company to be invited was Alfa Romeo, which presented two «dream cars», as we say today, ordered to the Carrozzeria Bertone, while the mechanics came from the Giulia’s and Marcello Gandini took care of the design. Actually, the two prototypes should have remained a pure exercise in style, but the success achieved with the Northern American public and with the dealers sparked the car’s entry into production. There were four and, at the company, they were called the «Montrealine», all mounting the Giulia’s 1600 cc engine. Giuseppe Luraghi, Alfa Romeo’s president at the time, gave the green light to the Montreal project, which created discontent among Nuccio Bertone, Marcello Gandini and the Alfa Romeo’s management.

The mechanical parts were considered inadequate, so they thought of equipping the car with a V8 engine (the one used on the 33 Stradale), increased to 2600 cc and 230HP, which did not fit in the body designed by Gandini. This started the war between Alfa Romeo and Carrozzeria Bertone. Alfa Romeo ordered the hood to be raised, plus a change at the base of the windshield. Gandini said no. After months of dense talks, finally Bertone gave in and the Montreal was presented to the Geneva Salon in 1970. The car had the same success it had earned at the Canadian Expo. The Alfa Romeo Montreal was put on sale in 1972 at the price of Lit. 5,700,000. The extras were: electric windows (Lit. 100,000), metallic paint (140,000) and, lo and behold, air conditioning at Lit. 290,000. The 1973 crisis was close and the new Alfa sportscar suffered its consequences. Everyone liked it, but just a few bought it. It was hard to drive, the chassis had been designed for the Giulia’s mechanics and the fuel consumption was rather high for the standards of those difficult times. The units produced between 1972 and 1977 were 3,925. The last two years were the worst. Only 50 models were manufactured, 38 of which were sold in the United States. To this day, the Alfa Romeo Montreal is one of the most known and loved Alfas by collectors and fans.