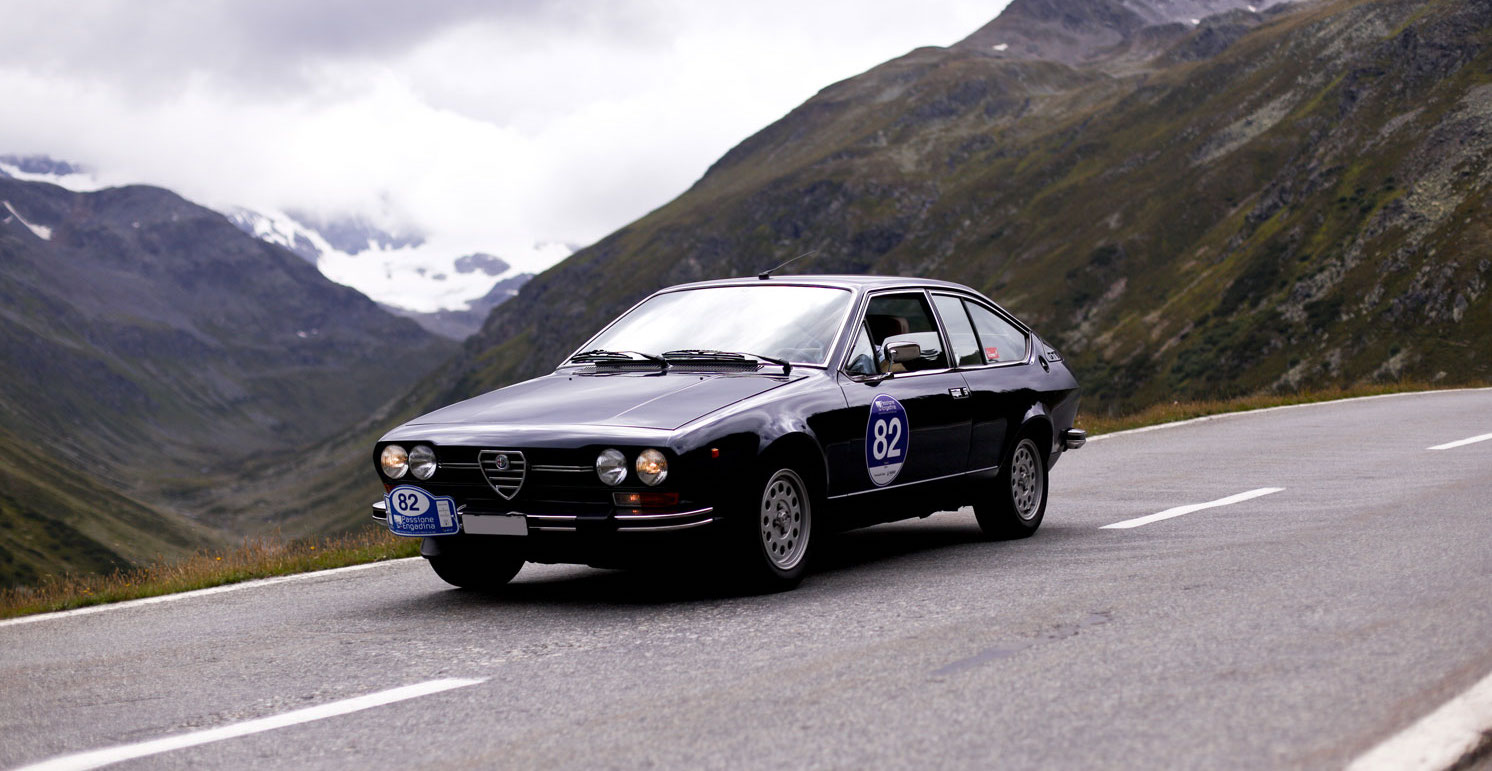 It was one of the most appreciated 2+2 sport cars of all times, both in Italy and abroad, especially in Germany and in the United States. It was presented in 1974, but its development was long and difficult.

The first studies began in 1967, when the Giulia GT was still very successful, but it had been launched in 1963 and the Alfa Romeo’s management started to think how to worthily replace it

The BMW 02 – better known as 2002 – had been presented in 1966. It was a two-door sport sedan, which was enjoying an international success. The Giulia GT was an authentic convertible, limited by a car body of compact dimensions and a not very capacious trunk, as opposed to the Bavarian company’s sedan that offered four comfortable seats, a larger trunk and a less distinguished car design. These were the prerequisites to start from.

The new car design was entrusted to Italdesign, the newly established company by Giorgetto Giugiaro, who had already created the Giulia GT, whose mechanical structure was used for the new car. At the same time, though, the Alfa Style Centre was developing another project, perhaps to have an eventual Plan B (at the time, it was an ordinary strategy for Italian car companies).

After years of changes and last minute rethinking, the official presentation of the new model occurred in 1974. It belonged to the Alfetta range, the lucky sedan presented two years earlier that, on its turn, came from the Giulia project. The new model mounted the sedan’s standard engine of 1779 cc with a power of 122 HP, while the interiors showed a very original dashboard for the time: the rev counter was before the driver while the instrument panel was on the right. We can’t know whether the interiors were created by Giugiaro or by the Alfa Style Centre’s designers. The Alfetta GT’s dimensions were much bigger than the convertible’s it was replacing; therefore, it was more comfortable, it had a larger trunk, thus it offered more occasions of use if compared with the Giulia GT. The specialized press loved it. When it arrived at dealers – where expectations were high – it was 1974, in the midst of the oil crisis, which was weakening the sales of high consumption sport cars. The Alfa Romeo 1800 proved to be rather rigorous if compared to its several German rivals, thus it had something more. The trunk with a big door was more spacious and handier than the Giulia’s. It still presented a sport rear-wheel drive, but less extreme. Many families chose it as their first car, which was unusual for a convertible. In the first two years, about 22,000 units were sold, a success. In 1976, the 1800 engine was replaced by a less powerful 1600 cc with 109 HP: thus, the GTV version was born, probably the most widespread name for this model, mounting a 2000 cc engine with the same power of the 1800’s. It wasn’t an absolute new entry, considered that the versions intended for the American market mounted that engine, which only differed in the power reduced to 109 HP and in the Spica mechanical injection, an obliged choice because of the very rigorous American anti-pollution rules, which caused some reliability problems. However, the Americans loved it. It was the occasion to slightly modify the grille, while bumpers were equipped with rubber guards and the GTV writing was applied on the interior ventilation grids. In 1978, GTV became GTV L, the power was upgraded to 130 HP and, finally, the solution of glued windshield and rear window – which had caused serious problems to customers – was abandoned. Some units mounting a Montreal 2600 cc engine were also manufactured, about twenty, and just for the German market. In 1979, it was the time of the Turbo Autodelta (Alfa Romeo’s Racing Team Division), 150 HP, equipped with an Alfa Avio turbocharger, which proved to be rather fragile and was replaced with a more reliable KKK.

In 1980, it was the turn of the second series. It probably was the less successful, with a car body overburdened with lots of black plastic components. But that was the design of the time. The 1600 version was cancelled and the GTV 6, equipped with a mechanical injection 2500 cc engine of 160 HP, was presented; yes, the model with a bump on its hood. 12,000 units were manufactured, almost all intended for the European market, Germany, the UK and, above all, the United States. In 1984-1985, 200 units were produced by the South African plant, equipped with a 3000 cc engine, right-hand drive, sold only in the local market and in the countries belonging to the Commonwealth. The manufacturing of the Alfetta GT/GTV finished in 1987, with 122,000 produced units. Nowadays it is very sought after by generations of collectors.