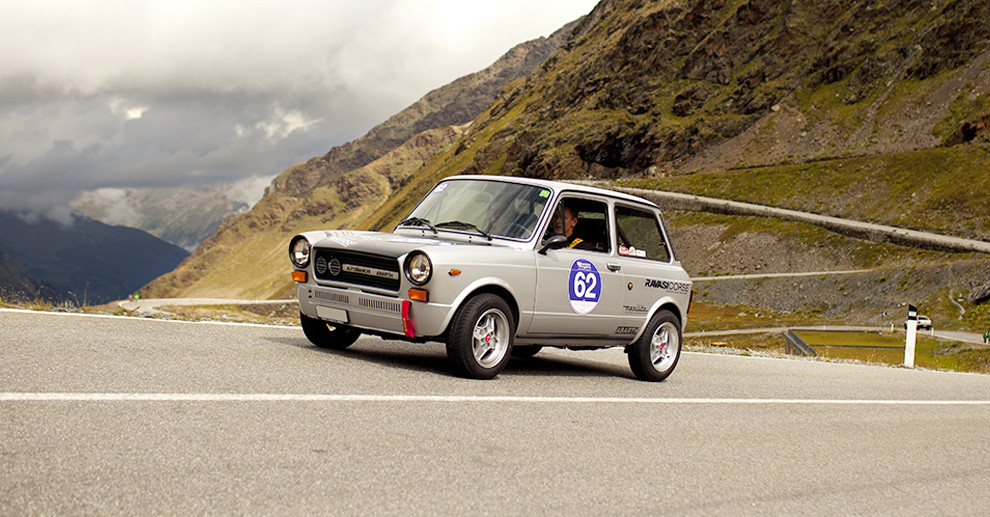 Models of this small car have not been circulating for a very long time by now. Yet, until the end of the Eighties, before environmentally compatible cars were launched onto the market, you could still see many of them. Then, after several car-companies-promoted demolishing campaigns, the Autobianchi A 112 met the same fate of dinosaurs: extinction. I remember it very well, also because a neighbour of mine, who was in love with the A 112, every time a new model was launched, she would replace her old A 112 with it. From 1969 to 1984, seven series of Autobianchi A 112 were manufactured, and at every change of model, I would enjoy a ride on it. There was one in particular: its car body showed a very peculiar shade of blue which, as I have recently found out, wasn’t really appreciated at the time. Its name was Bahamas Light Blue, internal code 451 F, with a matt black hood reserved to the Abarth version only.

The A 112 made its debut in 1969 at the Turin Salon, sharing the stage with another car that would represent an historic turning point for the Fiat Group: the 128. This was the first front-wheel-drive medium size car produced by the Turin car company. The Autobianchi brand had been taken over by Fiat in 1958, after about two decades of co-ownership between the Bianchi Family, original founder of the company, and Leopoldo Pirelli, owner of the renowned tyre company. Fiat’s clear aim was to counter the Mini’s success, which in Italy was assembled under license from Innocenti Milano: it was a sort of Milan-Inter derby competition, considered that the Autobianchi’s plant was in Desio, just a few kilometres away. At first, the A 112 range was limited to a unique version with the classic 903 cc engine, 44HP, which was the basis of the Fiat production of the time. The press criticised the trimming very severely as too poor, although a rather high selling price, which didn’t prevent the car’s success in the first two years of production. Out of a total of 85,000 sold units, of which 35,000 were sold abroad, the goal was achieved. In 1971, with the second series, the range was expanded to include three versions: Normale, E (which stood for Elegant) and the long-awaited sport version, already announced in 1970 with a prototype that Carlo Abarth presented to the press with the obvious intent to draw the attention of the Turin car company on a possible future cooperation. The red and white prototype with wider fenders and chromed rims was regularly registered in January 1970 and delivered to the director of Fiat’s Research Centre, who tested it for a long time, judging it too extreme to be put into production. Therefore, it went through a complete modification. The A 112 with a 982 cc engine, 58 HP, was launched onto the market in September 1971 at the price of Italian Lit. 1,325,000 and it sold like hot cakes. The 400 pre-series units expressly manufactured between July and August for the launch were sold in two days and all of them in the only available colour for this model, to say Rosso Corsa (racing red), with hood, wheel arches and back panel in a matt black shade which was the characteristic feature of the sport model. The same Fiat Company was taken aback and had to hurriedly increase the production to fulfil the steeply growing orders, about 500 units per month.

In 1973, the engine capacity was increased to 1050 cc and the number of HP to 70; but it was only in 1978, with the fourth series, that the most important changes occurred, with a 20 mm roof raising to improve the car’s internal habitability, a body restyling and a new design for the dashboard. In my opinion, this is the most accomplished A 112 series before the extravagant restyling of the ’80s. In fact, after only 18 months, the fifth series was presented, finally equipped with a 5-speed gearbox, but already with some not really successful plastic details, as we will see later. Thus, a constant trimming refinement began to take place, as well as in body colours and in the sixth series, when the A 112 lost its exterior sport feature replaced by a plainer trimming, which was completely gone in the seventh and last series, presented in April 1984. By now, the A 112 was behind the times and its replacement, the Y10, was ready to be launched. However, a new attempt was made to make the small Autobianchi appealing again with some changes that proved useless. Nine months later, production was stopped to clear out the stock.

The last A 112 Abarth was registered in France in July 1983, after 121,699 units, corresponding to less than 10% of the entire A 112 production. To date, it is estimated that, between the first and last series, about 400 Abarth models have remained.