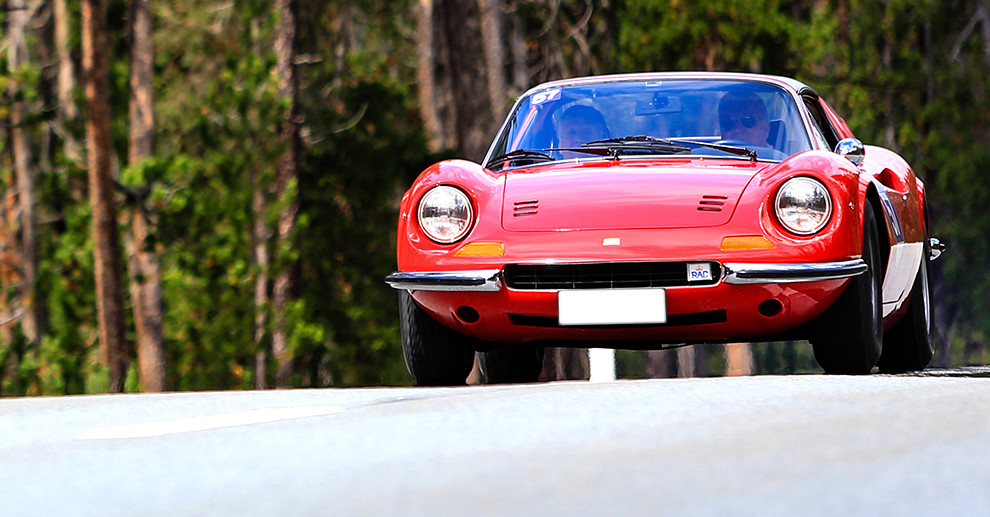 Not simply a car, but a memorial to a lost son/span>

In 1956, a very rare genetic disease called Duchenne muscular dystrophy took the life of a talented young man of 24 about to graduate in Mechanical Engineering. Alfredo, Dino for everyone, was the eldest son born from Enzo Ferrari’s first marriage with Laura Garello. In 1952, Dino started collaborating to the engine design of his family company’s cars. Shortly before dying, Dino had pursued a study on the design of an engine to be mounted on a compact berlinetta.

In June 1956, when Dino passed away, a grief-stricken Enzo Ferrari had all Dino’s designs delivered to his second house, built next to the Fiorano’s racetrack, which from that moment on became his real dwelling. The project of the Ferrari Dino 206 was started only in 1965 upon Mauro Forghieri’s appeal (he was a very renowned Ferrari’s designer). In 1967, the new sport berlinetta of the Maranello’s company was finally presented, but the name Ferrari did not appear on the bodywork: only the writing DINO in italics, on a yellow background. This was Enzo Ferrari’s request and he never explained the reason. As is tradition, the bodywork design was entrusted to Pininfarina, while Scaglietti body shop in Modena manufactured it. The 6-cylinder V-type engine, with 2000 cc of capacity and 180 HP, was precisely the one designed by Dino Ferrari a year before his death and was so reliable that, in its different evolutions, was mounted until the mid-Eighties.

The Dino 206 wasn’t really appreciated by the Ferrari’s clientele of the time. In particular, Ferrari’s most faithful customers didn’t understand the absence of the Ferrari’s logo, the «Cavallino Rampante», from the bodywork. This was the main reason of the car’s limited success: only 152 units were manufactured up to 1969, despite being, in my humble opinion, one of the most beautiful Ferraris ever made.

In the same year, Ferrari presented the 246 GT, which should originally be the evolution of the 206 GT. However, in that period, which would become an historical turning point, the company from Modena was taken over by Fiat and the Dino’s engine of the 206 GT was mounted on the car with the same name manufactured by the Turin’s car company. I think it was an excellent car, about which I will write later on. The Ferrari 246 GT was presented at the Turin Auto Show in 1969 and highlighted some new technical characteristics as compared to the 206 GT: a cast iron base transverse-mounted 65-degree engine, heavier but less sensitive to vibrations, with an increased capacity of 2400 cc and 195 HP. The bodywork was 90 mm longer, making the car body, this time completely made of steel, 200 kg heavier. However, this peculiarity didn’t impair the performance, given the increase in capacity.

Thanks to the 246 GT, the Dino model won the heart of sports cars fans and, over the years, it would be manufactured in three series: the «L» series, from 1969 tom 1970; the «M» series, equipped with new disk brakes and new interiors. This series was launched in 1971 and was manufactured for only few months. In 1972, the «E» series, the last one, inaugurated the GTS model with the very successful removable car roof panel, which counted more than 1200 manufactured cars in just one year. The following year, after 3741 manufactured units between GT and GTS, the 246 was replaced by the Dino 308 GT4, designed by Bertone.