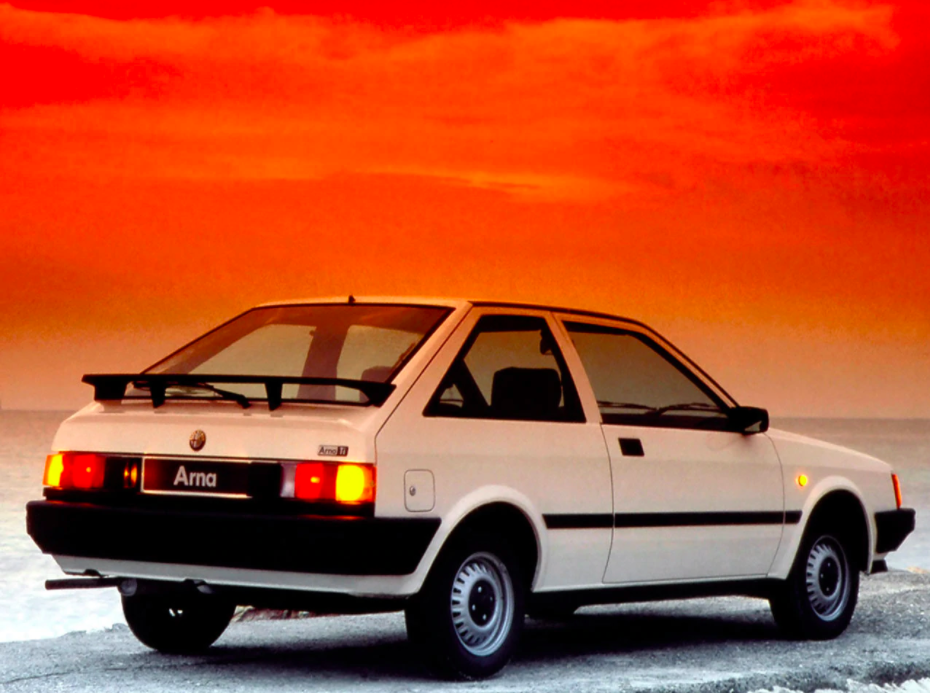 «Arna, e sei subito Alfista!»[1] would state the advertising slogan launching the new Alfa Romeo model, a lower end vehicle if compared to the Alfa 33 presented a few months earlier. When the car was displayed to the public, the fans of the Milanese brand reacted to the news as if it was an insult to their own mother; well, a great start, no doubt about it. In theory, the idea was good, but the difficulties met by Alfa Romeo, difficulties that came from the project manufacturing and, above all, the mistrust and strong prejudice that the Arna operation caused in Italy, determined a resounding commercial flop. But first things first.

Towards the end of the Seventies, the management of the Milanese Company, at the time owned by IRI, an Italian authority, realized that their range didn’t include a model of a lesser price and category than Alfasud. There were no fresh capitals to invest, therefore the idea was to «copy» the partnership between the at-the-time British-Leyland Group and Honda for the assembling and the marketing of a unique model of different brands. The whole thing in order to get round the duties imposed in those years by the EU on the imports of Japanese cars. The Honda Ballade, for example, a four-door sedan, whose name was changed into Acclaim, marketed with the now extinct Triumph brand. Models to be consigned to oblivion… in my opinion.

The partnership between Alfa Romeo and Nissan, called ARNA, was signed by the presidents of the respective brands, Takashi Ishihara and Ettore Massacesi, on October 9th 1980, and was a first in continental Europe: the joint venture, as we would say nowadays, would guarantee 3,500 workplaces and a development-manufacturing merging, even if limited to just one model. Pity that, in Italy, the entire operation was truly mismanaged.

Nissan would provide 20% of what necessary to the car assembling: in other words, Japan would ship the body panels to Italy, where they would be completed with Alfa Romeo mechanics and the Italian-Japanese components. The production site was built, in record time, in Pratola Serra, which wasn’t far from the Alfasud factory in Pomigliano d’Arco, in the same Italian southern region. The car model on which the entire operation rested was the Nissan Cherry N12, a classic example of economy car with an impersonal design, typical of Eastern cars, that Italian designers should improve by adding the Alfa Romeo style. The car featured the Alfasud 1.2 boxer engine, as well as its suspensions system. Apart from the building problems, which were immediately evident, because of the rapidity imposed by Alfa Romeo on the production site’s construction, the machinery for the car assembling had in store another bitter surprise: the Nissan body didn’t fit the Italian mechanics. Lost in translation? Maybe. Either the engineers sent to Tokyo from Milan had forgotten the measuring tools in some Italian workshops or… the Alfasud system was still popular.

Therefore, Alfa Romeo spent a huge amount of (public) money to change the suspensions and engine supports directly in the Japanese factories, causing further delays in production. Meanwhile, the Milanese Company had presented the Alfa 33, which successfully replaced the Alfasud.

In 1983, at the Geneva Salon, Alfa Romeo found itself in the absurd situation of presenting two new models with almost the same mechanics: the Alfa 33 and, precisely, the Japanese-Italian Arna 1.2 L and the three/five-door SL. Needless to say which one came out as the queen of the Swiss event, and the new economy car of Eastern origins was eclipsed by its bigger sister. After so many years, we can say that the Arna was judged too severely. Actually, the Italian mechanics was first-class as well as the Nissan-Cherry components, which were superior to the Alfa Romeo standards of the time. However, as I said earlier, in Italy it was decided that the Arna project had to die. In 1986, the sentence was carried out by the Fiat Group, when they took over the Milanese Company. A phone call by the CEO Romiti interrupted the production of the Japanese-Italian economy car overnight. The last completed cars were sold out to public institutions, while the unfinished car bodies remained in Pratola Serra’s warehouses for long. Meanwhile, the production site was reconverted into the manufacturing of gearboxes and engines for the current FCA Group. With its 52,000 sold units in four years, the Arna is one of the most renowned failures in the automotive industry. The tragicomic implications of the operation were that the only one that lost billions of former Italian liras was Alfa Romeo. In the country of the Rising Sun, well, they didn’t squander a yen…

[1] Literally, it means: Arna, and you become instantly an Alfa Romeo fan!