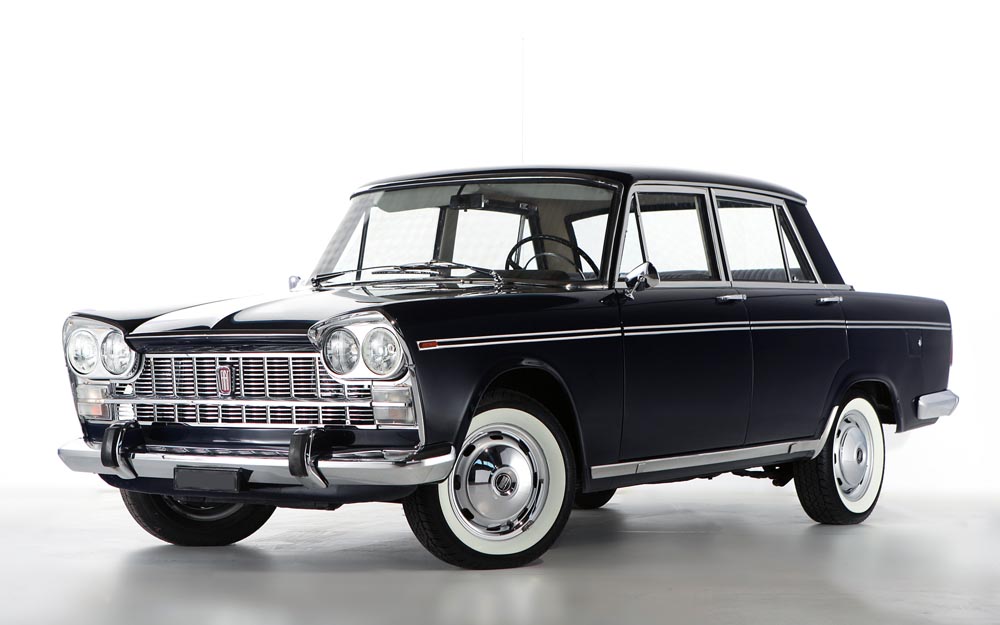 Just a few remember the last Fiat’s flagship model, more than fifty years after the car had been discontinued. I’m saying “last” because after the end of this model, the splitting of a 6-cylinder in-line engine was never used again in the Turin car house’s range. Actually, a new attempt was made years later with the presentation of the Fiat 130, but it was a useless bloodshed of which I’ll tell you on another occasion.

An advertising campaign of the time would say: “Fiat’s range has a car for every taste” and it was true. In the ‘50s and ‘60s, the Fiat Group was present at every market level; from the 600 to the 1900, plus the “cross-country” model – we would call it SUV nowadays – the Fiat Campagnola.

In the mid ‘50s, the problem was the replacement of the now old 1400/1900 models, which had been produced since the end of the ‘40s. Gaudenzio Bono, Fiat’s managing director at the time, entrusted the renowned designer Dante Giacosa with the development of a new flagship model “family”. In 1954, the company’s board of directors approved the directives concerning the new car, both for the Development and the Sales Departments. Luigi Gajal de la Chenaye guided the latter. Well-known for his difficult and irascible temper, he had immediately made it clear that in order to compete with the European competitors, it was necessary to develop a 6 if not an 8-cylinder car. Dante Giacosa, the person in charge of all Fiat’s car design, didn’t agree but put up with it and carried on with several studies, more out of technical interest for new, innovative and refined solutions rather than for Gajal de la Chenaye’s requests.

Giacosa designed a V8-cylinder engine that was later mounted on the wonderful “8V” coupe. Rather than a car, it was a masterpiece of aesthetics and technology.

In 1956, the project 112/114 was launched. It indicated a new superior class car project and, to gain time, it was decided to pursue the restyling of the 1400/1900 series, which was denominated “B”. Gaudenzio Bono ordered that the new flagship models should be presented at the Geneva Car Salon of 1958, but, because of the long tests and tuning, the occasion was missed, much to the dissatisfaction of Bono… who, besides, had to give up the idea to have the new sedans equipped with air-suspensions such as Citroën’s. Finally, in 1959, exactly one year later, in Geneva again, the new Fiat 1800 and 2100, equipped with a 6-cylinder fuel engine and, for the first time ever, a station wagon version, called “Familiare”, were presented. The new car had extended, square lines, with its peculiar “fins”, very American style, both in the front and in the rear. All this came with a little but decisive Pininfarina’s touch, which gave it a splendid European design flair. The 1800 mounted a 6-cylinder in-line engine with 1795 cc of capacity and 85HP. The 2010 was equipped with a 6-cylinder in-line engine with 2054 cc of capacity and 95 HP. Next to the two sedans, and the unsuccessful Familiare, the 2100 “Berlina Special” was developed, a limousine assembled by Carrozzeria Ellena in Turin. I believe that not a single car of this model has survived, but I would be glad to be proved wrong. Because of the urgency Gaudenzio Bono had imposed to develop the new model, it was immediately figured out, as soon as the car was out on the market, how to fix its flaws: it wasn’t easy to distinguish the two different models and, first and foremost, the 4-drum brake system that didn’t fit the cars’ size and class.

In May 1961, the second series was presented: the 1800 became “B” and the 2100 was equipped with four front headlights and called 2300. Both were equipped with Girling’s 4-disk breaking system. Their Achilles’ heel was the excessive fuel consumption, due in particular, if I may say, to the not very refined body aerodynamics. “A nice look requires some suffering”: that must have been the slogan at the Fiat’s Style Department. Despite the lukewarm reception, the Familiare went through a restyling too and, thanks to the back end’s new design, the floor panel was lowered of 12 cm, thus making the trunk wider. However, this didn’t help to relaunch this version’s sales. The time of trendy station wagons had not come yet. With this second series, also the 1500 L (long) was presented; it was equipped with a smaller engine in order to meet Italian cab drivers’ requests, who found the 6-cylinder 1800 too costly for their needs. It wasn’t a success, because the mechanics were undersized for the sedan’s body and its performance was mediocre if compared to its high consumptions. Another news was the 4-seat coupe version, designed by Ghia, and called 2300 and 2300 S – with two carburettors – that was rather successful. The Fiat 1800 and 2300 could be equipped with several refined paid extras such as the Saxomat clutch, a progenitor of the present day automatic gearbox, a power steering, a sunroof build under license by Golde. This famous German company provided this sort of accessories, and a clever air conditioning system that would freshen the car passengers through vents positioned at the base of the back window and through the cabin’s roof. The 2300 version could also mount a 3-speed gearbox provided by the American company Borg Warner, which unfortunately added to the fuel consumption. The 1800/2300 series wasn’t a raging success, especially abroad, where it was associated with a small cars’ manufacturer; however, in Italy the sales were bigger, even if these models were meant for well-off customers, and this limited their circulation. A curiosity: in Sankt Moritz, Mr Gianni Agnelli used a 2300 Familiare equipped with an automatic gearbox and a big wicker basket on the roof to stash his skis. In 1967, the 2300 went through a restyling with a new design of the trunk and, a year later, the all 1800/200 range was discontinued after an assessment of about 150,000 sold units (but data aren’t certain). The Seat version did better – at the time strictly connected with Fiat: its “1500” Normal and Lujo, the Spanish version of the 1800, sold 135,000 units until 1971.